What to look for when buying a digital camera?

What to look for when buying a digital camera?

Is pixel count all that important?

Traditional camera uses film to record images. But for digital camera, the film is replaced by a small sensor chip – either CCD (charged Coupled Device) or CMOS (Complementary Metal Oxide Semiconductor) – which stores the image into a digital format.

The CCD or CMOS sensor's surface is divided into tiny squares called pixels and each pixel records one segment of an image. The more pixels a sensor has, the more details it can record. While it's true that the number of pixels a CCD contains is an excellent measure of the details the digital camera can contain, this is not enough.

Picture quality doesn't necessarily improve with another million pixels. Other features such as lens, colour filter used on the sensor and digital image processor also play an important role in determining picture quality. (See picture below to understand the intricacies of a digital camera in the analogy of a human eye) 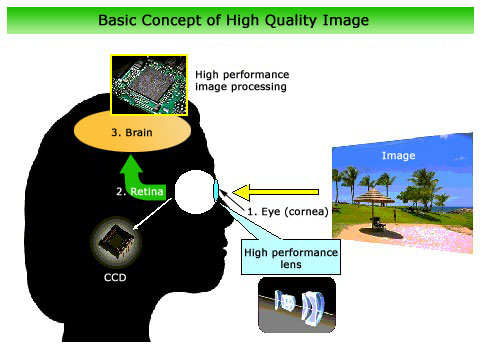 So don't just be deceived by pixel count. Check for manufacturer's lens and CCD.

How to take quality pictures from the digital camera?

How to ensure that your batteries will not run out on you at the crucial moment?

What can you do with the images you have taken?

How to select the right resolution and compression?

Resolution is the measurement of an image in pixels. Since the maximum available resolution of an image is only getting higher, digital cameras use a process known as 'Compression' to reduce the size of the image to a manageable size before it is stored. While this dramatically increases the amount of pictures you can store on each memory card, there is a trade off in quality.
Pending your usage of the images, the table below is a suggested guide.